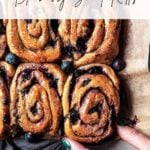 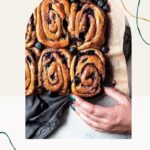 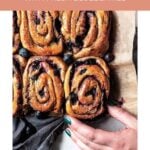 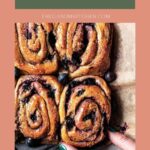 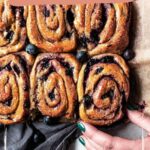 These blueberry cardamon sweet rolls are like the grown up and more sophisticated cousin of cinnamon rolls. They are wonderful little rolls that are made up of a sweet yeasted cardamom brioche dough, fresh blueberries, blueberry jam, and a cardamom syrup glaze.

These sweet rolls are made with a yeasted brioche sweet dough, so it all begins by activating the yeast. The key to this is getting the milk warmed to about 110 degrees, which should feel a little warm. Next, let the yeast dissolve in the milk for about 5 minutes. It should look a little frothy, bubbly, and it should smell like yeast. See the pic of my successfully activated yeast below!

After that, it's just adding in the rest of the ingredients one at a time and then beating the dough until enough gluten has formed. Gluten is what gives the sweet rolls its chewy texture; without gluten, the rolls would be cake-like and crumbly. To see if there is enough gluten, you just need to do the windowpane test. The windowpane test is when you take a little section of dough and slowly pull it until it's thin enough to see through. If it breaks before it's translucent, there isn't enough gluten.

Once the dough has risen, it's time to roll it out and add the blueberry filling. I just used Bonne Maman blueberry jam, but feel free to use whatever blueberry jam you like best. First, stretch out the dough to a rectangle using your hands over a piece of parchment paper. The stretching will help keep those blueberries stay in place. After you have stretched the dough, go ahead and lay another piece of parchment paper over the dough and roll it out until it's about ¼ inch thick. Remove the parchment paper and then dollop that blueberry jam on top. Then starting from one end, roll the dough on top of its self. There is quite a lot of jam, and the dough can get pretty wet from all the blueberries, so I found it helpful to lift the dough by the parchment paper and push it on top of itself that way. After that, cut the roll into 1 ½ inch sections and place them in a larger baking dish.

Thanks so much for reading about these blueberry cardamom sweet rolls! If you make them or have any questions, go ahead and leave your feedback in the comments!

Looking for more sweet roll recipes? Check these out!

Cardamom Knots with Bourbon and Chocolate