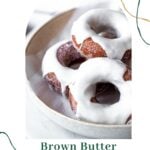 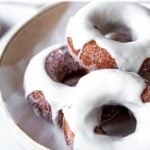 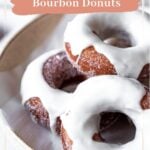 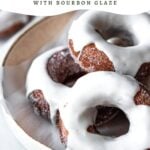 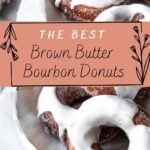 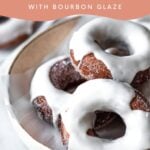 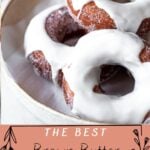 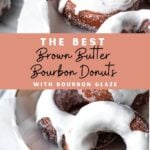 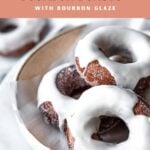 These brown butter bourbon doughnuts are half baked good and half cocktail, and they are delicious. It's your basic doughnut turned on its head. It takes the already amazing fried yeasted doughnut, and then adds brown butter and bourbon. What could be better than that?

Last week I wanted to experiment in frying all kinds of dough. So, I spent the week testing these and churros. Churros are amazing, but there is something so classic and wonderful about doughnuts. My favorite comes from this little place in Santa Monica called Sidecar. They have this one doughnut filled with passion fruit and topped with sweet Italian merangue. It's so good that it could be classified as a life changing doughnut.

For these, I didn't want to make anything that over the top; I wanted just improve the perfect classic doughnut. The brown butter gives the dough a richer taste, and the bourbon adds a little caramel and vanilla flavor.

The trick to browning butter is to cook it long enough for dark brown bits to form but not so long that it burns, and those bit turn black. Cook it on medium heat, cooking it on high could burn it prematurely. Also, cutting the butter into sections helps it to melt evenly.

This dough is super easy to make. It's adapted from an NYT recipe, and it's so simple to through together. It does make a very wet, springy dough, but it's very easy to work with after the 1st rise.

I'll be honest; this is a super potent icing. Once you mix the powdered sugar and bourbon together and give it a taste, if it's too strong keeping added sugar until it reaches a flavor you like.