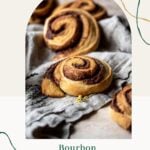 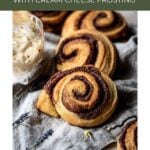 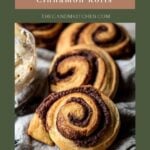 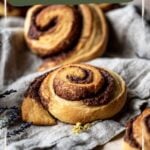 These bourbon cinnamon rolls are made of a sweet and buttery brioche dough that's swirled around an incredibly cinnamony filling that spiked with bourbon and then topped with a bourbon cream cheese frosting.

This is a yeasted brioche sweet dough, so it all begins by activating the yeast. The key to this is getting the milk warmed to about 110 degrees, which should feel lukewarm, and then letting the yeast dissolve into the warm milk. After that, it's just mixing in the rest of the ingredients one at a time, followed by letting the dough rise.

The cinnamon bourbon filling is really the star of the show in this cinnamon roll. It has five whole teaspoons on cinnamon to make sure there is a significant punch of flavor. It's extremely easy to make; you just beat all the ingredients together and then smooth it over the rolled out dough.

This bourbon cream cheese icing is another star. I made this with mascarpone just because its what I had on hand, but it will be just as delicious with regular cream cheese. This is also really easy to make and is essentially just beating all the ingredients together as well.

LOOKING FOR MORE BREAKFAST RECIPES?! CHECK THESE OUT!

Blueberry Muffins with Lemon and Cardamom

THANKS SO MUCH FOR READING ABOUT THIS AWESOME PIE! IF YOU MAKE IT BE SURE TO LEAVE A COMMENT AND/OR GIVE THIS RECIPE A RATING! I WOULD LOVE TO HEAR EVERYONE'S THOUGHTS!